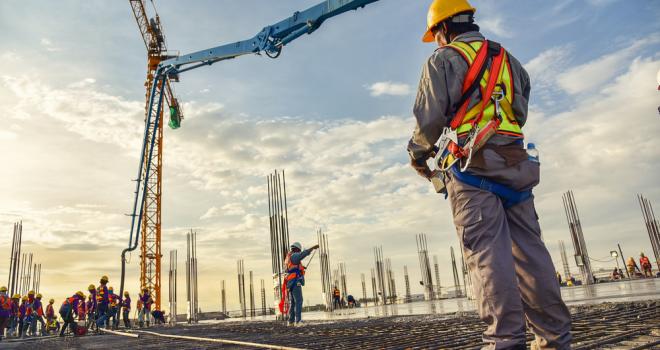 Despite increasing political headwinds, and market uncertainty, Developers who develop for a living still need to be able to make their projects stack up. Mitchell Brandtman explores how construction costs will likely impact different sectors across the East Coast of Australia and gives their escalation forecast for 2019.

State and Federal elections are looming and bringing with them both promises and fear-mongering which in equal parts discourage Developers and purchasers alike, and put downward pressure on property values and confidence. This is on top of markets moving from record activity into decline, slowing GDP, low wage rises, and a per capita recession.

Despite the challenges being faced in the private sector markets over the next few years, we will continue to see the major East Coast cities evolve with significant public spend underway on major committed infrastructure projects. Commentary often focusses on the market impacts of this Public spend on major projects. There is no doubt that infrastructure and landmark precinct buildings can have an impact on costs – in particular in already heated markets, and for materials that are in high demand by different sectors. However through monitoring key activity data we know that fluctuations in broader construction costs are more closely correlated to demand in residential construction.

If labour is a key component then contractor and sub-contractor confidence is a leading indicator of what is going to happen. Right now in almost every major centre, residential contractors are worried that their current workload is greater than their future workload. Will this lead to an immediate drop in the construction cost per dwelling? No - however it will change the balance of power away from sub-contractors back to head contractors, and will give Developers something that they have found lacking in the previous cycle – greater competition. We know that markets take time to adjust and to find their new normal, so we expect to see widened tender price spreads across most sectors and a continued difference between expectation and on the ground experiences when it comes to current and future costs. Though one thing is for certain, the upcoming markets won’t allow for any ‘fat’ that may have crept in through the boom times. It’s time to get sharp again.

Market commentary is that the Sydney and Melbourne markets are into the downturn cycle and that Brisbane has bottomed out. If this is the case then what we are still likely to see are all three of these markets ending this cycle at a level higher than their long term average approval rates. The point to note here is that post decline there will still likely be a similar amount of work under construction as was near the top of the previous cycle.

When we look at approvals of dwelling units on a moving annual basis, we can identify that approvals for both developments with more than 4+ Stories, and Townhouse product are continuing to trend downward. We are seeing that a number of previously approved dwellings will not commence in this cycle. While the number of cranes has not yet reduced, both of these factors are putting downward pressure on contractor confidence. 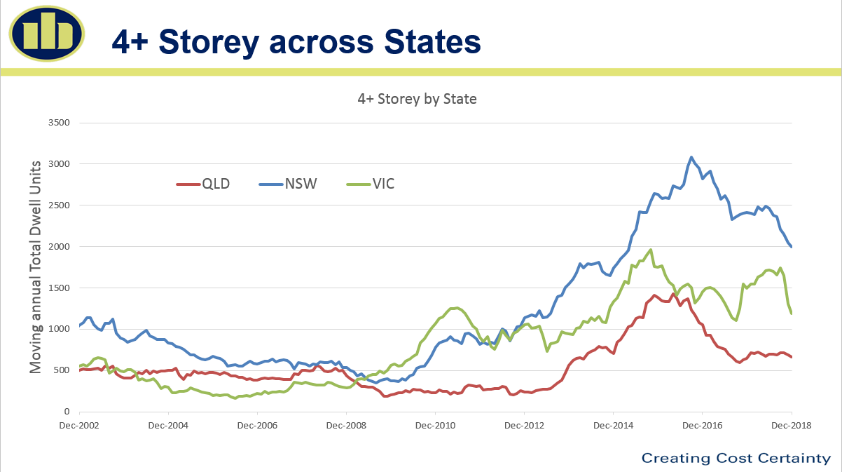 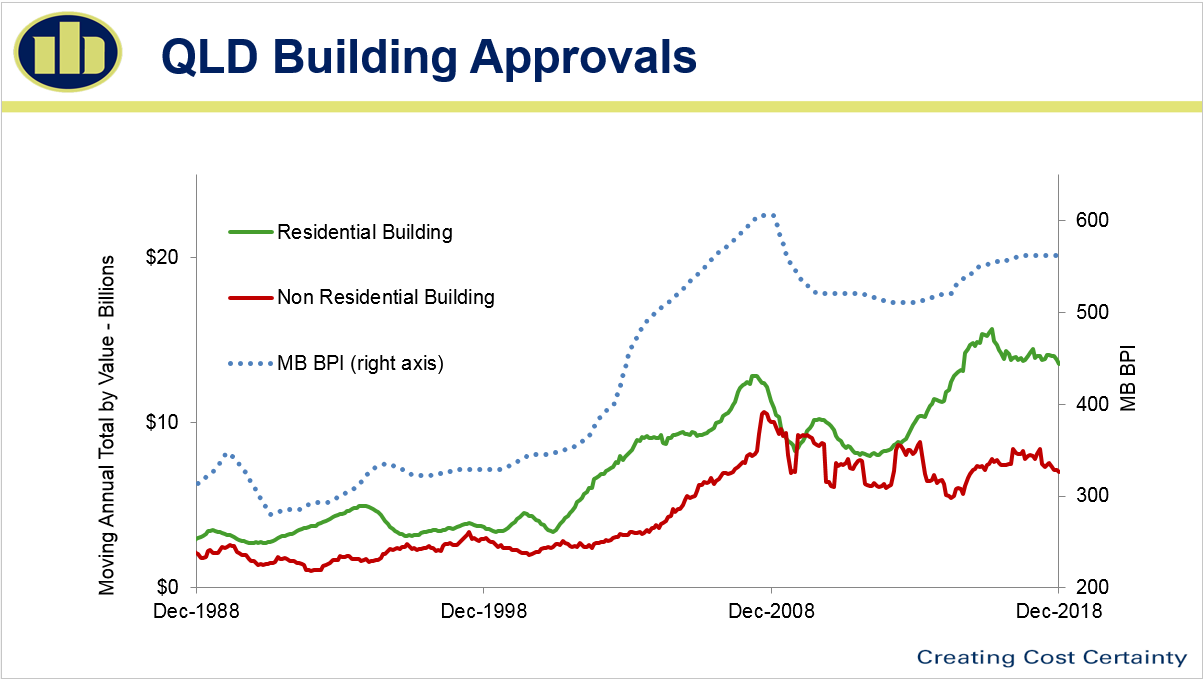 South-East QLD, and Brisbane in particular, has seen a dramatic change in the construction landscape. While there are signs that residential approval numbers have begun to bottom out, we have seen a decrease in projects under construction and that decline is going to continue to grow into the future. The market has become confident in delivering at an unprecedented volume but is now going to have to come to terms with the ‘new normal’ – which is construction levels at or about levels last seen in 2014. This is assuming that all of the projects currently being marketed (green fill on graph) reach the market at the scheduled times. This will be a challenge until we see some indications of increases in unit values, and the market understands the impact of the upcoming Federal election.

A few points to note:

1. The major banks are back and have funds available to lend for the right project

2. Project Bank Accounts (PBA’s) continue to cause uncertainty and will have a future impact on costs regardless of Govt demands for this not to happen. Contractors are already employing additional contract admin staff and there is increasing talk of a 1-2% premium on projects involving PBA’s to cover not only the administration cost but also additional funding to assist with not being able to use retention as cash flow

3. Major projects involving Union EBA’s have already locked in their increases in labour rates, however there will be increasing competition for the limited pool of subbies who are able to work on signature projects

4. The last 6 months have seen an upswing in interest from counter cyclical investors and Developers who cashed in at the height of the last cycle

5. We do not expect residential construction costs to drop off dramatically at the head contract level, although there may be some opportunity to recoup margin at the sub-contract level

NSW continues to have strong levels of construction but there have been significant falls in both residential and non-residential building approvals as the FOMO changes to FOJI (fear of joining in). This sentiment is being fanned by tighter lending conditions and decreasing valuations – which provide a self-fulling prophecy designed to keep purchasers sitting on the fence.  The residential boom covering an area stretching from Newcastle to Wollongong and out as far as Penrith in the West has finally peaked and started to decline. Non-residential is also coming back off a peak, however there remains strong interest in industrial and commercial. This is impacting materials and labour that are common to both sectors. 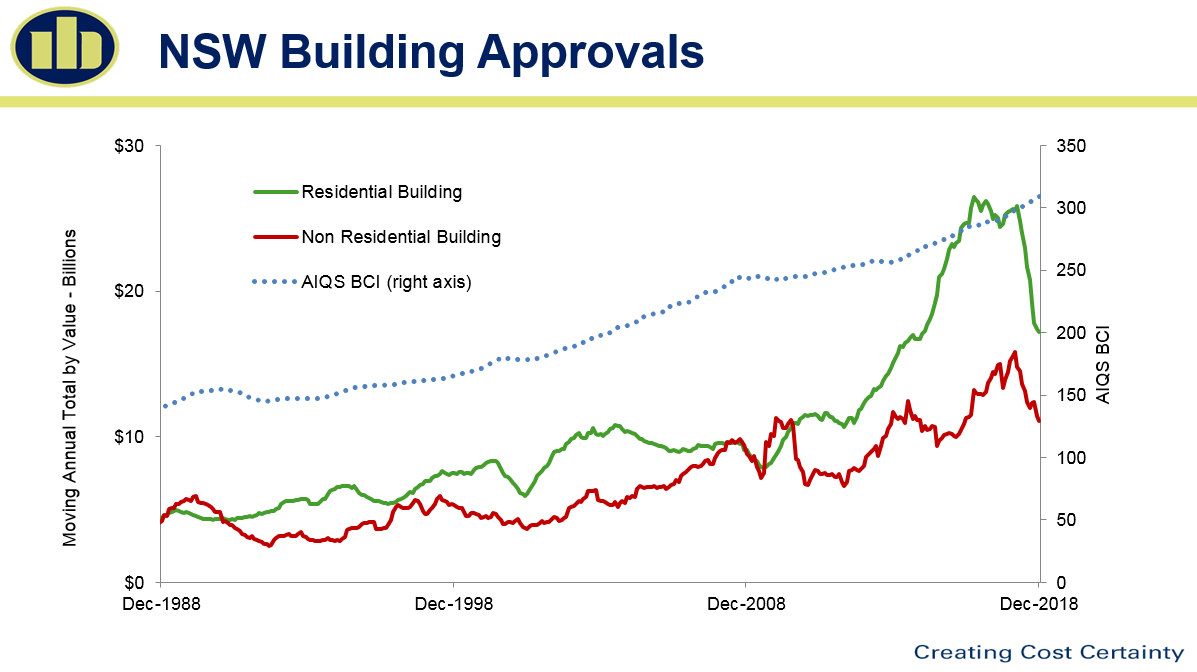 Demand for structural trades is starting to weaken and while it is unlikely that we will see cost reductions in this space in the near term, Developers and contractors will be able to take advantage of a greater range of choice in preferred contractors.  Demand for finishing trades and formwork remains strong and wages continue to rise.

Regions such as the Illawarra and Hunter continue to thrive off the back of both the growth in the Sydney market and increases in local amenity. Supply of residential apartments and subdivisions in these areas is growing in line with demand. Some units in these areas are starting to find their price ceiling and the challenge going forward will be keeping product affordable.

The Victorian economy remains the envy of many other States with Infrastructure, and Public spend, continuing to compete for the limelight with the residential sector. While residential is losing momentum the other sectors have at least 2 years of demand built up from population growth and the sheer volume of these works will offset any short term declines in residential. 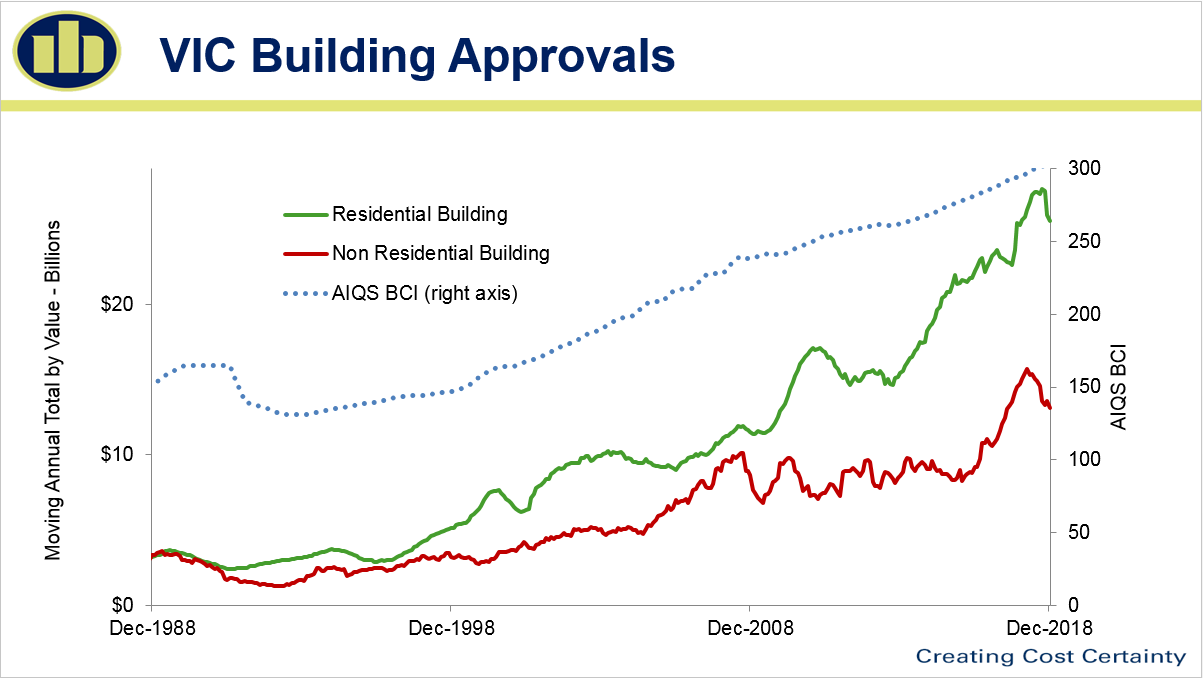 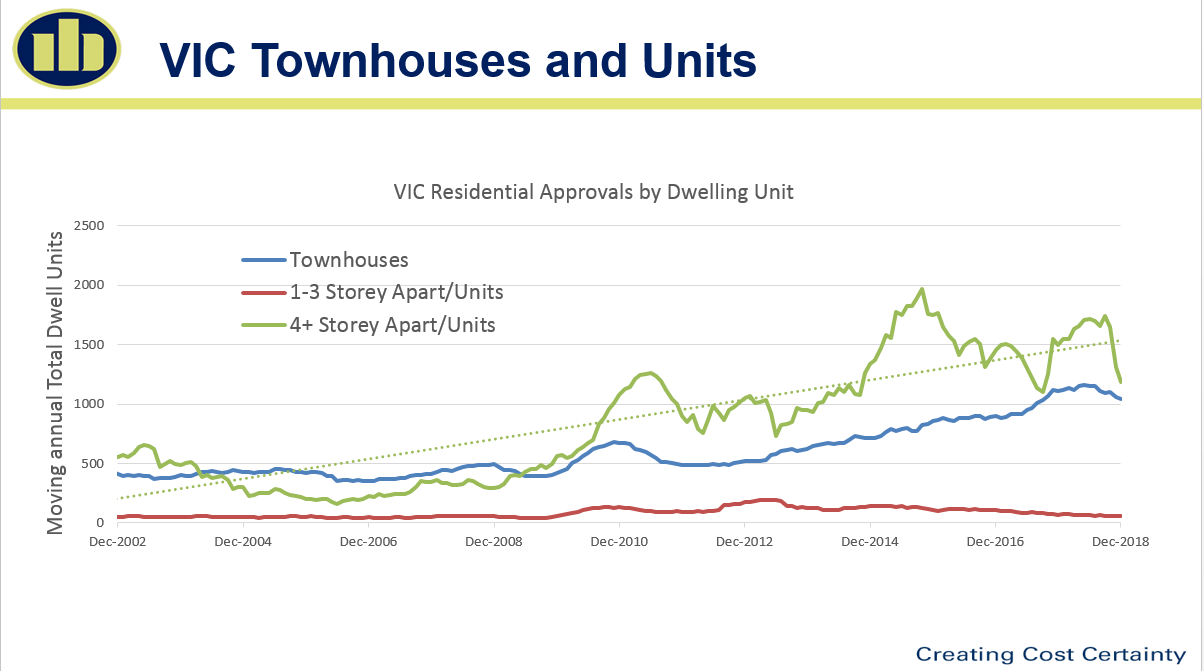 As discussed in a previous update, the short term rally in apartment approvals experienced at the end of 2017 was largely driven by a small number of large projects and didn’t reflect the broader market. Whilst the trend is down it is still off a significant base and above the long term average trend. This has been supported by the strength of the townhouse market as owner-occupiers look for more space closer to the CBD. With the highest immigration figures for any Capital City, and both wage and job growth likely, underlying demand looks set to continue in the short term. However lack of price growth, and negative sentiment from both banks and Government is lowering Developer confidence and a number of projects will remain on the planning boards this cycle.

Developers are still able to get Contractors of choice to tender, however encouraging them to remain competitive and not walk away when they are the lowest tenderer can be problematic. Contractors are managing their book of work cautiously, instead of aggressively. 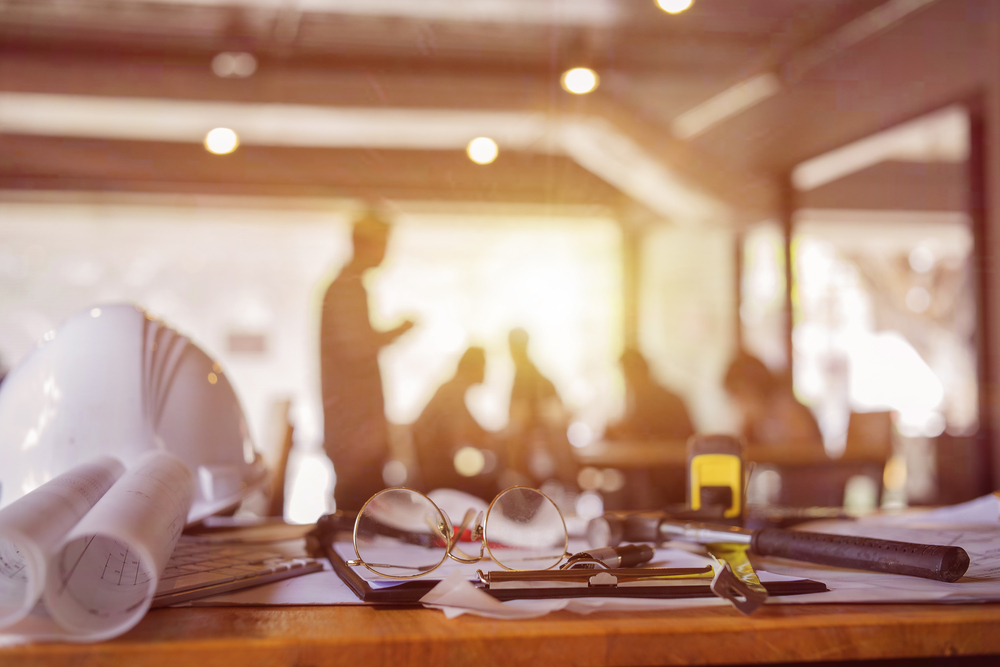 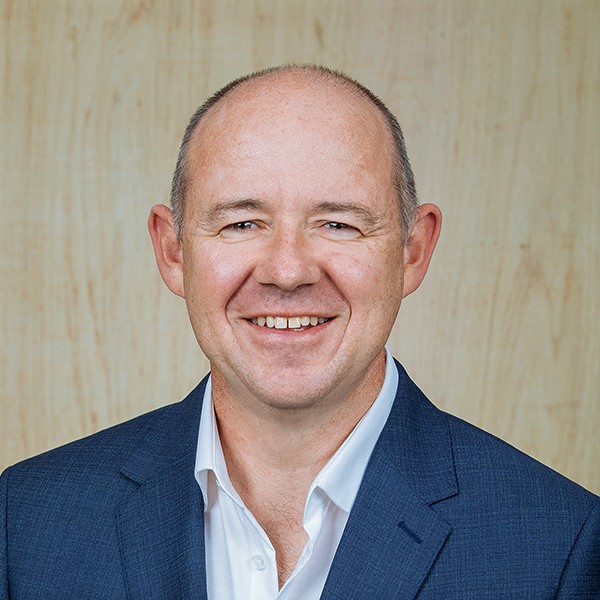